Kim Min-jeong (Hangul: 김민정), also known by her stage name Winter (Hangul: 윈터), is a member of the South Korean girl group aespa and the female unit GOT the beat.

On October 26, 2020, S.M. Entertainment revealed Winter as the first member of aespa.

On November 4th her Avatar was revealed, æ-WINTER, through the video SYNK, WINTER.

Winter made a special appearance in the music video to Kangta's remake single "Free To Fly 2021," which was released on July 14, 2021.

On December 27th, it was announced that Winter will be debuting in the first unit, GOT the beat, of the female project group, Girls On Top. She will be debuting alongside, Karina, BoA, Taeyeon and Hyoyeon of Girls' Generation, and Wendy and Seulgi of Red Velvet. They will be performing their debut digial single, "Step Back"[1], at the SMTOWN Live 2022 : SMCU Express@Kwangya online concert on January 1, 2022 before the official release on January 3, 2022.[2] 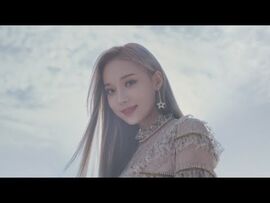